PC games for low-end pc or under 4GB ram i3 processors are for those who don’t have a high-end PC. So, to help you guys with the best games, I have curated this list for the top 10 games that will run under 4GB ram.

Sniper Ghost Warrior 3 is an open-world game, and driving around in your jeep feels a lot like in Far Cry 2.

The story of Sniper Ghost Warrior 3 could be taken from a low-budged b-movie. You are Jon North, an extremely cold elite sniper deployed to destroy a separatist cell in Georgia.

The disappearance of Robert, who’s also an elite sniper, and the relationship with your girlfriend Lydia, a mercenary who grew up in the Georgian war zone, help your cause.

The story of Max Payne 3 is based on the later life of Max. His wife is dead, Max has no family, and he is all alone. He developed an addiction to alcohol. But it has a horrible past. So, he left New York.

Once upon a time, he led a disgusting life without any job after being alone. However, he gets an offer from an old friend; he doesn’t know him accurately. The situation is like this; he has to protect a wealthy family as their bodyguard in Brazil, a country of corruption and drug dealers. He accepts his job offer.

But the situation is not comfortable as it sounds; once, at a business party of the family, some regular street gang appeared and tried to kidnap the primary family member Rodrigo and his wife. And so much more to it. Play to find out.

The Outlast 2 is a first-person psychological horror survival video game developed and published by Red Barrels. It is a fantastic game the lots of history inside Horror Things Like Monsters.

A journalist named Blake Langermann roams the Arizona desert alongside his wife Lynn to explore the murder of a pregnant woman known only as Jane Doe Blake and Lynn get separated in a helicopter crash.

However, while traveling through a village inhabited by a deranged sect, Blake must find his wife, who believes that the end of days is upon them.

Help This Website Grow By Contributing From Your Purchase on Amazon

The sequel is based on the clinch between the Templars and the Assassins. The story about the apple of Eden continues. Desmond and his crew found their first traces of the hidden burial chamber of the ancients – Minerva, Juno, and Jupiter – where they might find the truth behind the story of Eden.

To see this chamber, they need to dig deeper into the time of the Renaissance of Italy – the high times of the family Auditore and the protagonist Ezio.

Additionally, the story guides the player through several puzzles and hints, where each of them brings up pieces of The Truth and brings you closer to the chamber and the apple of Eden.

Originally Sleeping Dogs was going to be a direct sequel to the True Crime series many years before they came out. Fortunately, that never came to fruition.

After a few changes, sleeping Dogs came to be and a few publishers later. Some will say he is the spiritual successor to the True Crime series. Too good to be bound to a set that is so deservedly dead.

Sleeping Dogs is taking place in Hong Kong, and you have to play the role of an undercover cop with ties to a small group of triads as you work your way up the ranks and work from both parties.

Life is Strange is an episodic graphic adventure game that brings two concepts: the back in time and the system of choices.

However, it is a beautiful game, starting with the immersive soundtrack and cinematic photography. The characters are complex, and the story is very engaging.

As the story unfolds, the player needs to make some choices, many of which will have future consequences. It is a journey that explains and practically the result of our actions. Even the simplest can have effects we didn’t even imagine.

This game is one of the Far Cry series’ best and most likable Villains ever, Period! The Villain will undoubtedly leave an imprint on Your brain: D played his role so well that I felt FC3 is better than FC4, although FC4 added more features than FC3.

Far Cry 3 offers a LOT. It’s not your regular shooter, no; Hmm, It’s pretty hard to say. On Rook Island, you can find plants, animals, and valuable gear to upgrade your Jason. Furthermore, you do this by crafting ammo pouches, medicine, or valuable items that can make hunting a little easier.

There are quite a lot of different weapons to find/buy. I didn’t find any guns that seemed underpowered. A single game playthrough should take you well over 20 hours, maybe even 30, if you take your time to explore the fantastic landscape and secrets the island offers.

The Walking Dead is an episodic adventure game performed from a third-person perspective. The protagonist works with a disorganized group of survivors to stay alive in the middle of a zombie apocalypse.

The title works like a comic that is played, where you make your choices, and the story takes its course as you decide. Each new scenario allows you to explore points of interest, solve puzzles, and interact with objects and people. The graphics use cel-shading to clear the comic streak, change expressions, and bring the characters to life, all rich and well-built.

Mafia 2 has an open world, stores to shop at or rob, a police system, and many other things you’d expect from that sort of game. However, like Mafia 1, the game is a lot more structured. Instead of having much side content, it plays out like a traditional game campaign, with little time for free-roaming.

Furthermore, the gameplay is straightforward to get used to, from stealth missions to full combat; this game gives you some brilliant gunfights. The police evasion is a very tedious but overall more fun method.

Deserves the spot in our list for the best four GB ram games for pc.

The prototype happens when you combine GTA4 ‘s open worldliness with Crysis 2 ‘s plot with a protagonist who is essentially a cross between the Parasite of a biological human T-1000 and a DC comic. The superpowered gameplay is my favorite part; with the various moves at your command, there are many ways to win the significant story battles and side missions.

When on foot and exploring Manhattan, you use your augmented abilities to parkour the landscape. It can also deserve its spot for best games for 4gb ram i3 as it works on low-end specs.

By Harsh
Follow:
Harsh Talreja (Editor at Gaming Nation) is a passionate gamer who loves to play video games during all waking hours of the day or night. He has been playing video games from the early age of 10 years, and since then, it's never coming back. He has always wanted a platform for Gamers In India that could bring unbiased reviews, the latest trends, and news for Mobile, PC, and Console gamers. He wants to support the gaming culture with simple, straight, and unbiased information in India.
Previous Article 10 Best Gaming CPU in India 2021
Next Article 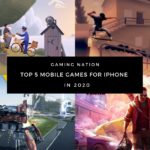