If you are building a budget PC or want to upgrade your old gaming setup with a mid-range CPU – looking out for the best CPU under 20000 makes sense. The mid-range processors under 20000 are powerful, but you can benefit from overclocking to boost the performance.

Before upgrading the CPU, you might want to know the “why” of it.

Why Should You Upgrade the Processor?

However, with so much manipulation in the prices of PC parts – they get unreasonably expensive.

Useful Video: How to Get CHEAP PC parts for your Gaming PC (Indian Budget Gamer)

But, Gamers are Gamers – and we’ll spend way more on PC parts than we should. (of course not talking about the console gamers here)

Here’s the updated list for best processors under 20000 in India.

Ryzen 5 5600X is undoubtedly the best value for a money processor under 20,000 Rs in India. It’s a mid-range performance-based CPU that would handle all regular gaming and editing-related tasks quite seamlessly.

As the name suggests, it supports XFR (High-Frequency Range) during stable thermal conditions, meaning you perform better without spending more on overclocking.

Coming to the daily usage performance, the 5600X performs similar to Intel’s i5 11600k – and here are some scores that’ll help you better.

Whether it’s Ryzen 5 3600 that was released roughly three years ago or the Ryzen 7 3700X, which is way overpriced and has a massive layoff from its legacy, think again before dropping the 5600X from your watchlist.

In terms of performance, price, or usage benchmarks – there is too little to compromise with the Ryzen 5 5600X!

In a nutshell, if you’re a gamer and want the absolute best for gaming and you don’t care about the price to performance, power consumption, TDP, or anything rocket science (I mean rocket lake, no joke!) – then the Intel i5 11600K is the best CPU Under 20000 for Gaming & gamers like you and me. That’s it.

Intel i5 11600k is not a bad processor. In fact, according to UserBenchmark.com (a trusted source for hardware benchmarks) – the i5 11600k is the best processor you can buy in the market today. And they have good reasons to mention that way.

The Intel i5 11600k is one of the champions in mid-range CPU segments. With a base clock frequency of 3.9 GHz and a turbo frequency of up to 4.9 GHz, this tiny 14 nm-based processor is way more powerful than you might think.

On paper, the Intel i5 110600K just beats the Ryzen 5 5600X. Realistically speaking, if I had money to spend on a decent CPU – only specs don’t matter. The price-to-performance ratio and raw power do.

So, if you want to spend money only for pure performance – go for Intel; if not, go for AMD.

The next on the list is Intel’s i5-10600K processor. Some might say that Intel’s i7-10700K is a better choice than the i5 10600K. But, let me tell you that the price and availability make a huge difference here.

While you can buy i5 10600K CPU under 20000, that might not be the case with i7 in Indian markets (neither with the i5 10th gen right now). Both have similar performance and not much difference between these processors; however, if you are on a tight budget, consider going for i5 10600K rather than the i7.

This one is different. Because it’s not just the CPU but APU, it comes with in-build Radeon Graphics that will very well be enough for casual games. You need not worry about spending on discrete graphics cards.

It offers six cores and 12 threads combinations, unlike other processors in this list; however, though it is still an APU, it has a thermal power design (TDP) at just 65W – which compares a little to what Intel’s i5 11th gen consumes.

With a base clock frequency of 3.9 GHz and a Max Boost Clock of up to 4.4 GHz, you are experiencing quality here. The only downside to me could be multitasking since the cache memory is just 19MB. I expected more AMD!

Yes, AMD Ryzen 5 3600 still deserves the spot on the best CPU under the 20000 list. One of the main reasons is that it’s still powerful and can deliver 1080p gaming without any problem.

The Ryzen 5 3600 comes with six cores and 12 threads with a base clock frequency of 3.6GHz and a max boost clock frequency of 4.2GHz. The TDP is at 65W, less than Intel’s i5 i5 10600K – but AMD is AMD, and you’ll likely face the typical AMD heating problem here. No exceptions.

With Ryzen 5 3600, you will need a separate graphics card. If paired with 1660Ti or any other mid-range GPU – you can easily do 1080p gaming with a high setting without any lag. Some stats below;

If you have a decent gaming cabinet, you don’t have to worry about spending extra on any air/liquid coolers – the included heatsink works just fine. Overall, the legacy of the Ryzen 5 3600 is far from over, at least for gamers in India.

You might need to keep a few things in mind before investing in a good processor. And, they entirely depend upon the kind of setup you have. This goes like this;

If you are clear on the above questions – you can go and look out for the best CPU under 20000 that suits the best of your requirements.

That’s it, folks. This was everything you need to know before buying the best processor under 20000 in India in 2022. 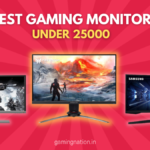